Unions Continue Their Support of Teacher Strikes in 2019 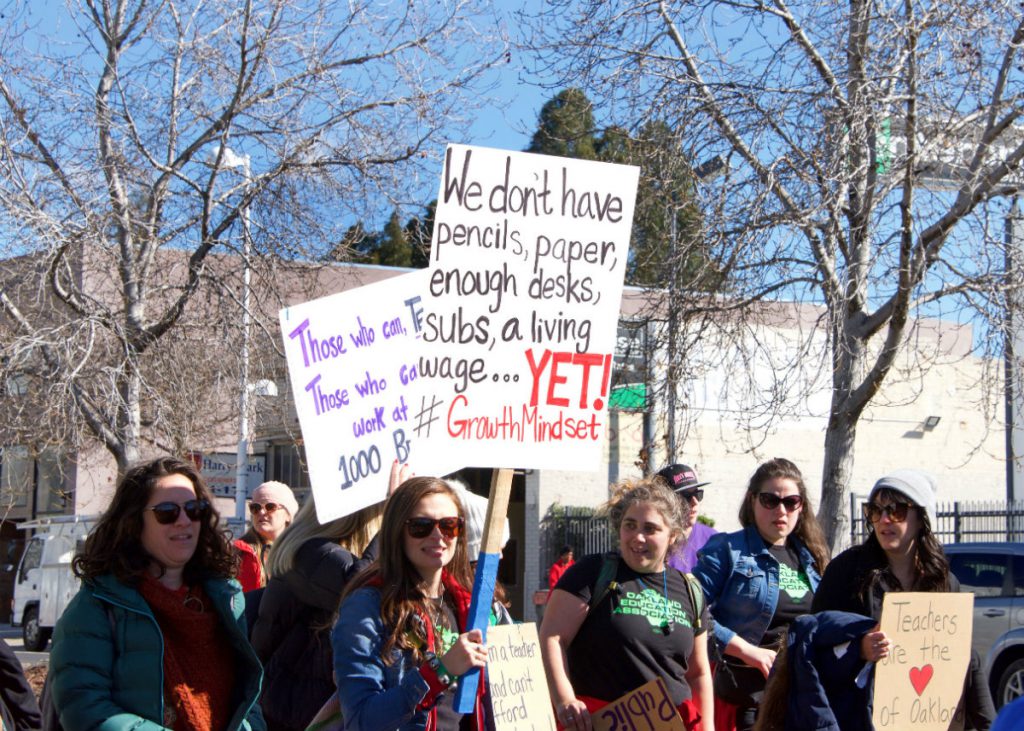 2018 was the year of the teacher strike. Educators across the country held demonstrations, strikes and walkouts that more often than not resulted in significant gains in salaries and school funding.

It all began in February with a statewide walkout by teachers in West Virginia. Nearly 20,000 teachers in all 55 counties of West Virginia participated in a walkout that lasted almost two weeks and resulted in a five-percent pay raise plus additional school funding. “The credit belongs to the people who took the step and stayed united — for nine days,” asserts West Virginia Education Association President Dale Lee.

The West Virginia walkout started a movement that resulted in multiple strikes and walkouts across the country, some even using the rallying cry, “Don’t Make Me Go All West Virginia On You,” says Paige Madden, an English teacher at Jefferson County Schools in Charles Town, West Virginia.

And the fever of success of these strikes doesn’t seem to be abating in 2019.

Why Were the 2018 Strikes So Successful?

The support of the public and the solidarity among teachers were two of the essential ingredients to the success of the teacher strikes.

Public support for teachers was one of the key reasons the demonstrations were so successful across the country. A 2018 public opinion poll by Education Next shed some light on what that public support meant:

Without the public in their corner, the teachers likely wouldn’t have been as successful in securing their demands — or in opening people’s eyes to the realities teachers face in terms of salaries and school funding.

In large part, the walkouts were organized at a grassroots level that focused on bringing teachers together before taking action. “When you take on these things, you really have to do them together. It really has to be big,” said Sarah Pedersen, middle school history teacher and organizer of Virginia Educators United.

The 2018 strikes were a lesson in solidarity that hasn’t been demonstrated in a long time. The Teamsters for a Democratic Union lists some of the lessons learned from the teacher strikes, the first few of which deal with building unity:

Solidarity was a big reason walkouts worked in states where teachers legally cannot collectively bargain, like North Carolina. “For years, people would say you don’t have a real union in North Carolina, but what we have been saying for so long is that a union is a group of people that come together with similar struggles and decide together to choose something better for themselves,” says Kristin Beller, teacher and grassroots organizer for the 2018 strike in her state.

She and others, backed by the North Carolina Association of Educators, were successful in their organizing efforts because they emphasized the importance of unity. “If we want to be a union, we must act like a union,” Beller says. “We may not have collective bargaining rights, but we can act like a union.”

The combination of public support and teacher unity turned out to be the winning combination for the 2018 strikes, with the two working hand-in-hand. Public support was so strong in large part because the public saw how united teachers were in their effort to fight for better schools. 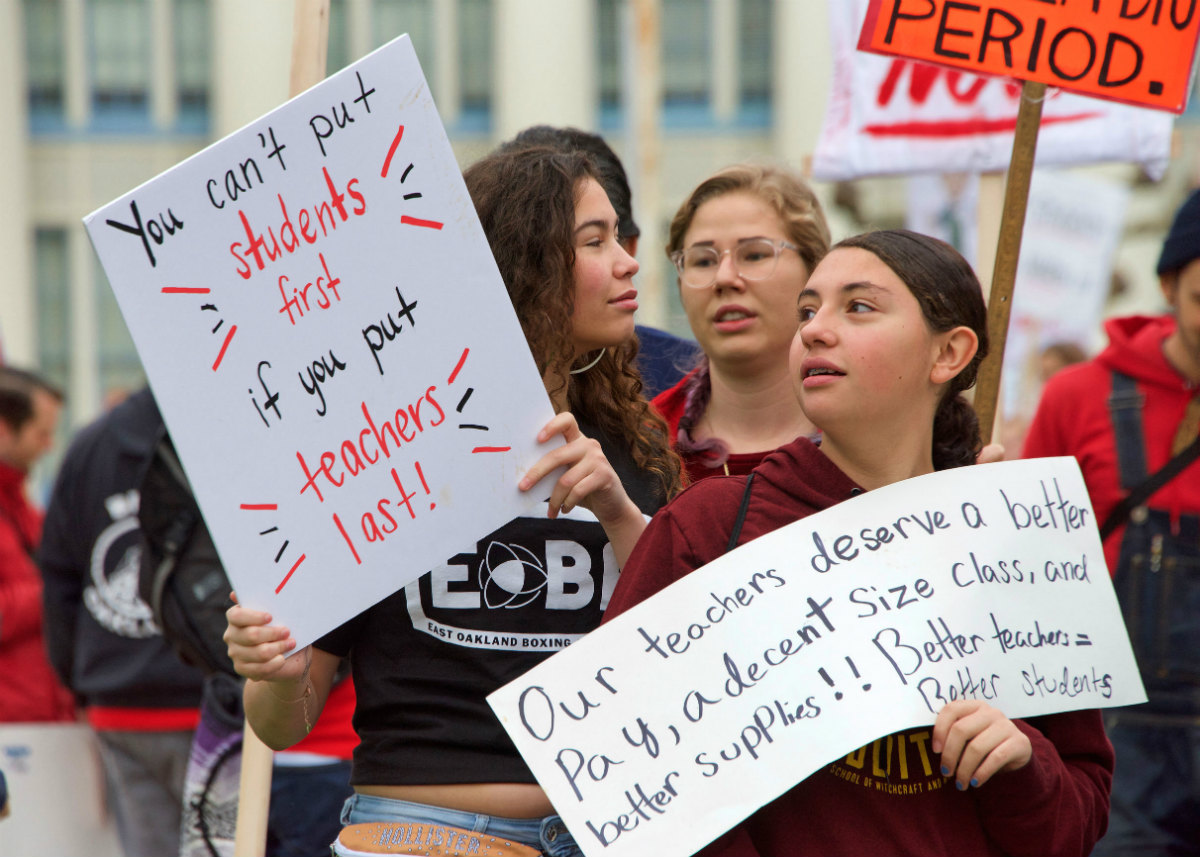 While most of the 2018 teacher strikes began at the bottom with grassroots activism, union leadership played an important role in supporting the strikes through communication, organization and legislative pressure.

“If we were going to build a movement to have the power to actually get a strike, it had to be bigger than any one organization. It needed to be a place where the grassroots could communicate,” says Ryan Frankenberry, former American Federation of Teachers West Virginia political director.

Almost all of the states where statewide teacher strikes occured are right-to-work states, note Stan Karp and Adam Sanchez, high school teachers and editors of Rethinking Schools. In such states, teachers cannot be compelled to join a union or pay union fees. They also have fewer collective bargaining contracts to guarantee their rights. Because of that, these states often have the steepest cuts in school funding and teacher pay and benefits, Karp and Sanchez explain.

Because of the suppression of organization and unionization in these states, the teachers had to be able to rally and organize themselves, aided by vaster union reach and power.

One strategy that unions in non-collective bargaining states used is known as Bargaining for the Common Good. With this strategy, unions work to form alliances with parents and community organizations to gain input that can be used in bargaining strategies.

That way, unions position themselves as “defenders of the public good,” explains Joseph McCartin, executive director of the Kalmanovitz Initiative for Labor and the Working Poor. He says the strategy demonstrates unions’ abilities to respond to the realities of the moment.

In a different show of solidarity with striking teachers, the AFT and NEA both presented resolutions and started initiatives to support those teachers. Some of those, as noted by Education Week reporter Madeline Will, are:

Through efforts like these, as well as direct actions at local and state levels, teacher unions provided support to striking teachers. 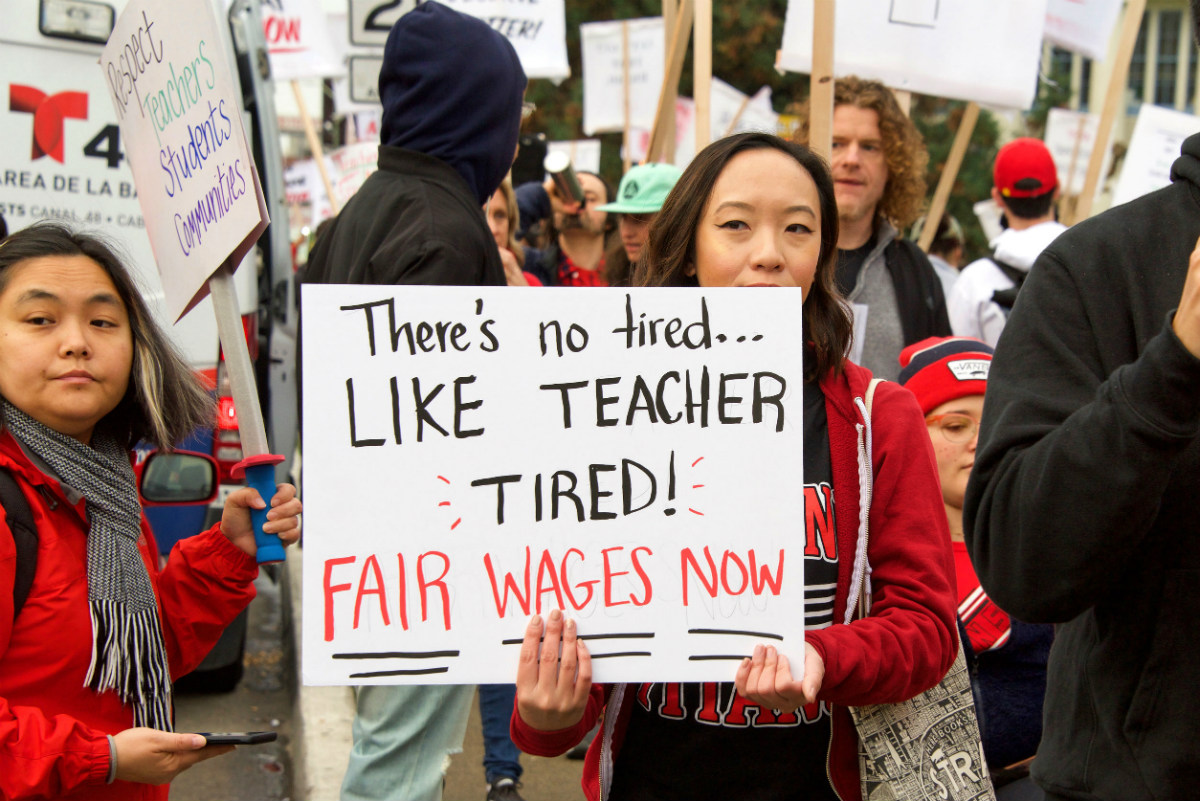 The Tidal Wave Continues in 2019

It appears teachers will continue their momentum through 2019. The start of the new year has already seen a number of new strikes across the US, one of which was in the Los Angeles Unified School District, the second biggest school district in the country.

Los Angeles Mayor Eric Garcetti, who served as mediator for the negotiations between the school district and United Teachers Los Angeles (UTLA), said that the strike, though “painful,” was the action that forced the issue to come to an agreement.

The Los Angeles strike was also a perfect example of how teachers, union leaders and the public can rally together to support educators. Actors, musicians, political leaders and firefighters all joined in and took to the streets in a show of solidarity. UTLA President Alex Caputo-Pearl called the day the agreement was signed “a historic day in Los Angeles.”

Similar strikes, walkouts and rallies have also taken place in Denver, Oakland and Virginia. These demonstrations are still being buoyed by the support of the 2018 strikes. Randi Weingarten, president of the American Federation of Teachers, says the West Virginia strike was “a game changer” that continues to inspire other teachers to unify and stand up for their rights.

Inspired by other teachers, assisted by unions and supported by the public, teachers are still positioned to make workplace gains for themselves in 2019. As evidenced by the strikes in the first quarter of the year, teachers recognize that this is their time and are organizing to continue one of the biggest labor movements of this decade.

UnionTrack ENGAGE software is the perfect platform for activists and union leaders to employ for real-time communication with members during times of organization and demonstration.