How Organized Labor Has Supported Working Moms During the Pandemic 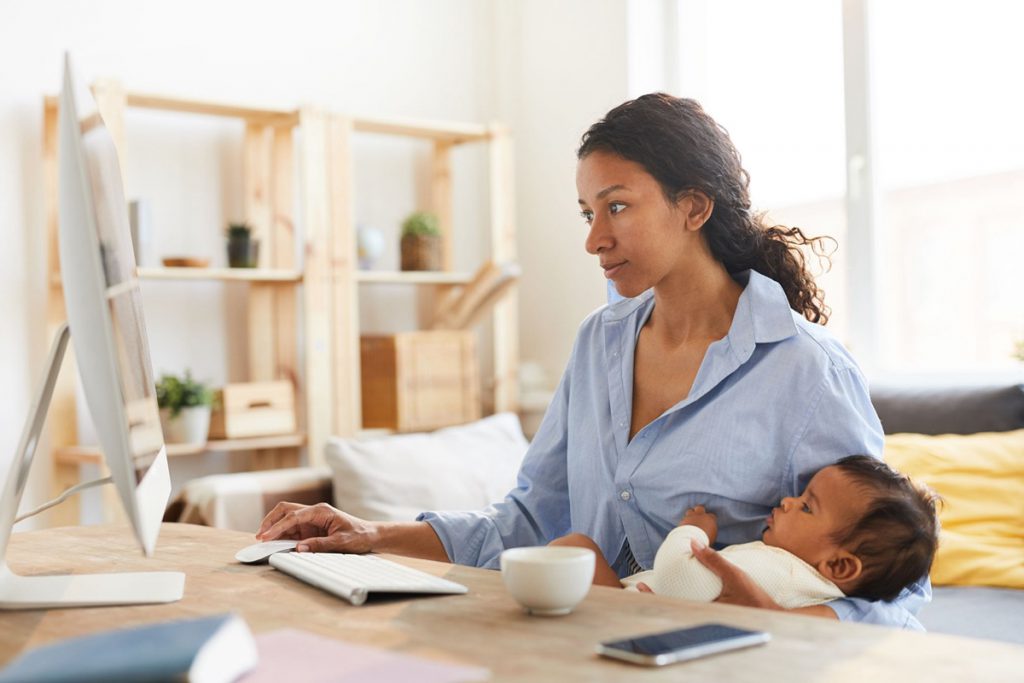 As a result, 55.1 million school-age students were no longer in classrooms, as Education Week reported at the height of pandemic-induced school closures. Another 5 million children were no longer attending daycares or preschools, according to Amanda Becker, a reporter for The 19th.

Instead, those children were at home. And so almost overnight, millions of working parents had to figure out how to juggle their jobs and care for their children, who had nowhere to go.

This was a scenario most families were not prepared for. And with a lack of adequate support and resources for working parents, the chaos of what to do about work and child care quickly developed into one of the most significant crises workers have faced during the COVID-19 pandemic.

While all parents have been impacted to some degree, the child care crisis has been especially hard on working moms, on whom child care responsibilities tend to fall more heavily.

Numerous studies conducted during the pandemic have shown that working moms were more heavily impacted by the child care crisis.

One such study, conducted in April of 2020 by Center for Economic and Social Research (CESR) at the University of Southern California, found that 33 percent of working mothers reported being the primary caregiver in the family. That figure for working fathers was 10 percent.

Consequently, those working mothers were the ones put in the position of having to find a solution to a problem for which they didn’t have any contingency plans. Marianne Cooper, sociologist at the VMware Women’s Leadership Innovation Lab at Stanford University, notes how working mothers have been disproportionately “bearing the brunt of a public-health emergency they did not create and cannot single-handedly manage.”

Many working moms have had no choice but to provide child care at the expense of their jobs and their families’ financial security. “Women are taking side steps, turning down promotions and other opportunities,” says Subha Barry, president of Working Mother Media.

Those women have had to make these sacrifices precisely because there are few benefits, if any, for working parents in the U.S. that would support them through a child care crisis.

Where Are the Parental Benefits for Working Parents in the US?

“They had suggested I take a voluntary layoff with no promise of return,” working mom Katie Simon tells Anneken Tappe at CNN Business. In the middle of the COVID-19 pandemic, Simon says she had to push her employer hard just for the option to work from home while she looked after her child.

Unfortunately, too many working moms have faced similar battles. Why has balancing work and child care been such a struggle?

One reason: The U.S. is the only industrialized nation in the world that does not guarantee paid family and medical leave for workers at a federal level, explains Diana Boesch, a policy analyst at the Center for American Progress. Boesch notes that only about eight states extend such guarantees for workers. For working parents, that lack of guaranteed paid time off has been the catalyst for so many of their child care struggles.

“Parents seem angry in a way that I haven’t seen them in the past,” says Caitlyn Collins, assistant professor of sociology at Washington University in St. Louis and author of the book “Making Motherhood Work.”

With no guaranteed benefits for most of this country’s working parents, the decision to extend any such benefits has been left to the prerogative of employers. While some companies have adopted policies to help working parents during the pandemic, that has been the exception, not the rule.

Without that support, too many working parents — especially moms — have had no choice but to cut back at work or leave altogether.

Working Moms Are Forced to Leave Work to Care for Kids

The child care crisis has had devastating effects on the ability for working moms to pursue their professional ambitions. For example:

This data suggests that the U.S. is experiencing a recession specifically for working women. “Women are taking the brunt of the labor market damage from COVID-19,” says Alicia Modestino, associate professor of Public Policy and Urban Affairs and Economics at Northeastern University in Boston.

“This is for two reasons. One is because a lot of the industries and occupations that they work in have been hard hit by the pandemic. But the second reason is because of the lack of child care and the disruption that daycare and school closures have caused.”

The exodus of so many working women will have far-reaching implications. That’s why unions, allies and labor advocates have been fighting to secure better workplace protections for them.

Labor Advocates Are Lobbying on Behalf of Working Moms

Though they may feel as though they are, working moms are not battling this issue alone.

Labor advocates, including unions, are lobbying on their behalf for workplace changes that would give them the resources and support they need to manage their jobs and child care responsibilities. “American’s labor movement supports easing the squeeze on working families as they raise kids,” then-vice presidential candidate Kamala Harris and AFL-CIO Secretary-Treasurer​​ Elizabeth Shuler wrote in September 2020.

Here are but two examples of what unions are doing to ease the burden on working moms:

While these efforts were critical for working moms during the pandemic, labor advocates recognize the need for — and are lobbying for — policy changes that would permanently transform the child care system in the U.S. to make it more equitable to all working parents.

The Center for American Progress is calling for state and federal legislation that “protects working parents from discrimination based on their caregiving responsibilities,” Diana Boesch and Katie Hamm write.

“The workplace rules in the United States were not built with caregivers in mind and need major restructuring to prioritize care and caregiving,” write Julie Kashen, Sarah Jane Glynn and Amanda Novello in a report by The Century Foundation and the Center for American Progress.

The authors propose that, at minimum, the following policies must be enacted to fix the child care crisis and help working parents, especially moms:

The Brookings Institute echoes the calls for federal legislation and funding to support access to and affordability of child care for working parents. “A permanent federal paid parental leave policy and a sustained funding increase for the Child Care and Development Block Grant (CCDBG) would go a long way in reducing the cost of childcare and working mothers’ overreliance on it,” write Nicole Bateman and Martha Ross, respectively a research analyst and senior fellow at the Brookings Institute.

For their part, unions are continuing to negotiate flexible working hours, better pay and benefits, and more child care benefits for working parents. They are also joining the efforts of other labor advocates to pass federal legislation to address this issue.

As they engage members in conversations surrounding the child care crisis, union leaders can use a tool like UnionTrack ENGAGE to facilitate real-time communication.