Has the Pandemic Been a Turning Point For Healthcare Unions? 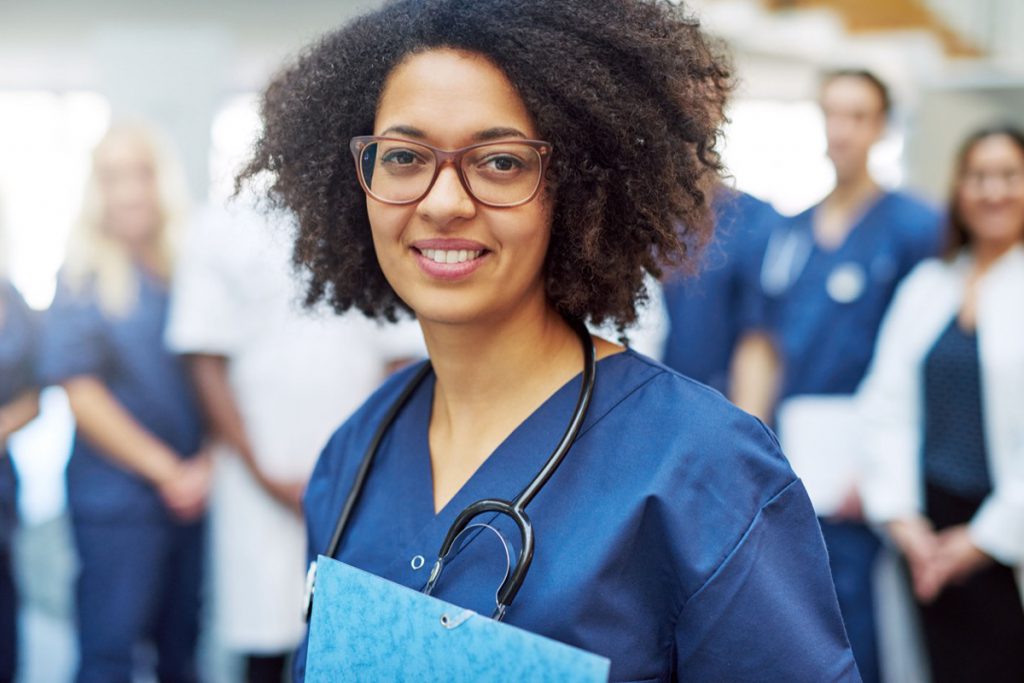 “Of all the injustices exposed by the pandemic, the risks faced by nonunion workers have become the most apparent,” asserts Gary Perinar, executive secretary-treasurer of the Chicago Regional Council of Carpenters.

Such revelations have been especially enlightening for nonunion workers in roles considered essential. For these workers, the COVID-19 pandemic has emphasized the importance of unity and solidarity in securing workplace protections. That’s a big reason why unions have become increasingly relevant throughout the health crisis — especially the unions representing front-line workers.

“The importance of unions has been even further heightened by both the COVID-19 pandemic,” writes Lola Loustaunau, research fellow at the University of Oregon Labor Education and Research Center.

“The concrete realization that these things could only be won through collective action” has led many essential workers to seek a path to unionization so they can harness the power of collective bargaining, Loustaunau continues.

This has been particularly true for healthcare workers, who have increasingly sought the help of unions to help safeguard their wellbeing at work during the pandemic

Few front-line workers have been at greater risk during the pandemic than healthcare workers.

By the nature of their jobs, healthcare workers have been the most vulnerable to exposure, and they’ve experienced greater infection rates than the general population, according to a study by Rutgers Biomedical and Health Sciences and affiliated hospitals.

Too many of these workers are also dying from a virus they are helping others fight. According to data from The Guardian and Kaiser Health News, more than 3,300 U.S. healthcare workers had died from the virus at the time of writing.

But this number could be well below the actual number of deaths because there is no central database with that information, a fact that the National Nurses United (NNU) union describes as a “failure” by governments and the healthcare industry.

“There is widespread resistance on the part of the healthcare industry to transparently provide information on nurse and other healthcare worker fatalities due to Covid-19,” says the NNU as it attempts to collect that data. “At the same time, federal, state, and local governments have failed to compel health care facilities to provide this data.”

One death is one too many for workers who should have access to the necessary protections when they report for work everyday. Yet many of these workers have not been able to (and still cannot) secure adequate protections in the healthcare facilities where they work.

It has been widely reported that healthcare facilities have struggled to provide basic protections to their essential workers throughout the pandemic.

“We’ve not taken action as a nation to make sure healthcare workers who are literally placing their lives on the line are given adequate protection,” laments Dale Ewart, executive vice president of Service Employees International Union (SEIU) Local 1199.

These workers stress government leaders haven’t done enough to protect them. “We are trying to care for patients despite limited supplies, limited staff and a rapid decline in hospital beds,” says Mary Turner, president of the Maryland Nurses Association.

“… As a labor leader and a fellow nurse, I’ve had to care for co-workers, nurses, and other front-line workers as they struggled for their lives on a ventilator. This is because our hospitals and our government haven’t protected us.”

Jessica Gold, assistant professor of psychiatry at Washington University School of Medicine, describes this as a system that has failed to protect its own people. “The fact that personal protective equipment (PPE) shortages still remain nine months into the pandemic pretty much says it all.”

While the majority of healthcare facilities workers have faced these struggles in some capacity, some have fared better than others. Those working at unionized facilities have largely been able to secure better protections through negotiations between their healthcare unions and employers.

Throughout the pandemic and across all industries and sectors, union workers have been able to secure better working conditions and workplace protections than nonunion workers.

The United Auto Workers (UAW) asserts this outcome is possible because union members’ voices are heard. “The power of union representation allows them to demand safety improvements, have a say in their workplace, their schedules and so much more,” the UAW writes. “In short, they have a voice that is heard, something that nonunion workers lack.”

Speaking up as a collective in the workplace is a big reason unionized facilities are 30 percent more likely to conduct inspections to identify and correct workplace health and safety hazards, reports University of Minnesota researcher Aaron Sojourner.

He theorizes this is because “unions can help organized workers learn about their rights, file complaints and provide greater protections against illegal retaliation by employers.”

Frustrated by the failure of healthcare facilities to protect them, nonunion healthcare employees have begun to have conversations with coworkers and labor unions about organizing their workplaces.

“People who have not been part of organizing campaigns and never were part of a union are upset about the issues at their workplaces—issues related to COVID and how their administrations have handled it,” says Dennis Kosuth, a registered nurse and member of National Nurses United. The workers see the differences at unionized workplaces and are taking action.

“Our phones are ringing in a way they haven’t in the past,” says Matthew Yarnell, president of SEIU Healthcare Pennsylvania, with workers complaining about ​“chronic short staffing, low wages, and not being prepared for a highly contagious airborne pandemic virus.” This, says Yarnell, is leading to ​“enhanced workplace action and organizing.”

“The pandemic didn’t create most of the root problems they’re concerned about,” says Stephanie Felix-Sowy, health care organizing director for SEIU Local 105. “But it amplified them and the need to address them.”

At many facilities, employees have moved beyond holding conversations to taking action to unionize. For example:

Stories like these highlight the momentum healthcare unions are experiencing. According to reporter Aneri Pattani, 16 percent of the new union representation petitions posted on the National Labor Relations Board website last year were in the healthcare industry, a two-percent jump from the previous year.

As union leaders continue their efforts to engage healthcare workers, a tool like UnionTrack ENGAGE can help facilitate real-time communication and collaboration.