Ways the UFW is Protecting Farmworkers During the Pandemic 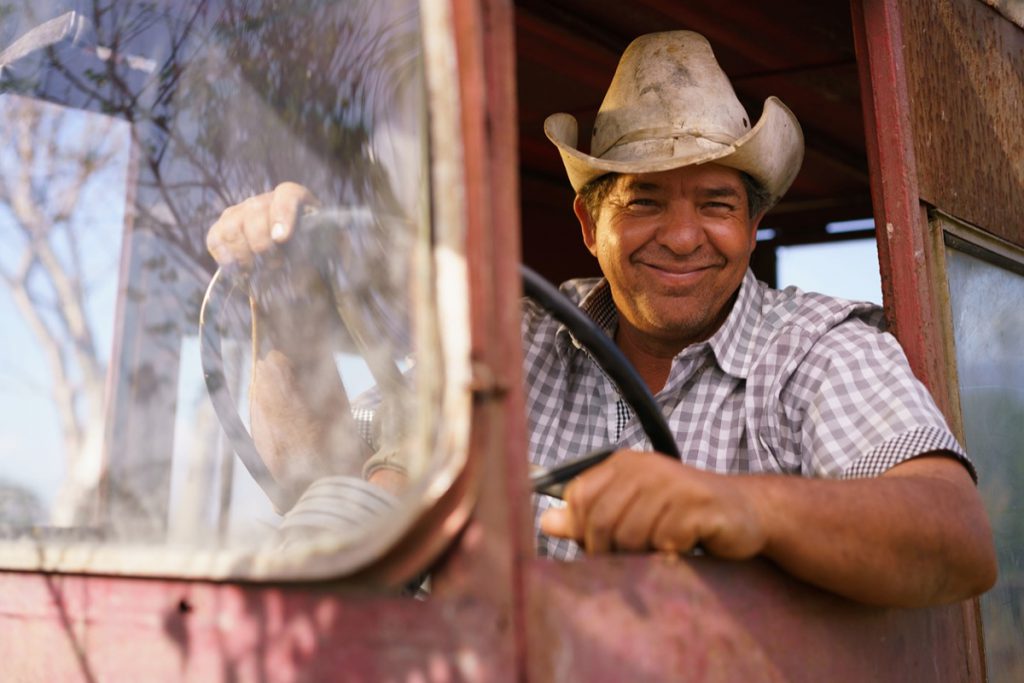 Without agricultural workers showing up for work, there would be no food. That may sound dramatic, but it isn’t far from the truth. Our supply of food would suffer without them.

That is why they have been classified as essential employees during the pandemic. Farm and ranch employees have been expected to put their health and safety on the line to ensure the food supply chain stays connected during the crisis.

“Indeed, during these trying times, farmworkers’ contributions in particular are more critical than ever,” write Zoe Willingham and Silva Mathema, respectively research associate for the Economic Policy team and associate director of policy on the Immigration Policy team at the Center for American Progress.

“They cannot shelter at home to remain safe from COVID-19; instead, they must go to work—along with meat packer employees, truckers, and grocery store workers—to ensure that the nation’s food supply is maintained.”

Just as these workers’ contributions at this time cannot be overstated, neither can the risk they put themselves in when reporting for work everyday.

Due to their unique working and living conditions, farmworkers have faced elevated risks during the pandemic. In fact, a study by Dr. Rebecca Fielding-Miller, assistant professor at the University of California, San Diego in the Division of Infectious Disease and Global Public Health, and fellow researchers shows that the death rate from COVID-19 is much higher in regions with a large number of farmworkers.

Agriculture Workers Have Been Hit Hard by the Pandemic

“Farmworkers already labor under what can sometimes be dangerous and unhealthy conditions, and now COVID-19 presents an additional challenge,” write Daniel Costa, director of immigration law and policy research at the Economic Policy Institute, and Philip Martin, professor emeritus of agricultural and resource economics at the University of California, Davis.

It’s a challenge that the agriculture industry has struggled to overcome, leaving nearly 2.7 million hired farmworkers exposed and vulnerable. In one case, at the start of the pandemic, all of the workers at Henderson Farms in Evensville, Tennessee, caught the virus and were forced into isolation, Bloomberg’s Mike Dorning and Jen Skerritt report.

This isn’t a story unique to one farm. Since the beginning, there have been reports of the virus spreading quickly through farms. However, there is not comprehensive national or industry-wide tracking of this data to give a total number of those infected, notes the National Center for Farmworker Health, Inc.

But it isn’t just their health that has been at risk. Their economic survival has also been threatened by layoffs and hour reductions due to social distancing guidelines and supply chain issues.

Multiple farmworkers from California shared their fears and experiences with Michelle Fawcett Ph.D., adjunct professor in the Media, Culture and Communications Department at New York University, and journalist Arun Gupta. One worker, Sinthia, a broccoli packing plant worker, had her hours cut in half. Another worker, Paola, said the vineyard where she works saw its staff cut in half, from 40 to 20 workers.

“It’s a very desperate situation. They don’t have food. Many are being laid off,” says Irene de Barraicua of Líderes Campesinas, a California-based farmworker organization for women. “Farmers are deciding to let their crops rot. They’re also letting the workers rot.”

Why COVID-19 Is Having Such a Big Impact on Farmworkers

According to research by Ed Kissam, co-trustee of the Werner-Kohnstamm Family Giving Fund, commissioned by the UCLA Latin American Institute/Center for Mexican Studies, the virus is two-and-a-half times more likely to spread through a farmworker household than the average American household.

Why are these workers so much more vulnerable? There are a number of different factors that contribute to COVID-19’s impact on farmworkers.

One of the biggest factors contributing to the spread of any virus in farming communities is overcrowded and substandard housing. These workers not only work side-by-side, but they also live in close quarters with inadequate sanitation facilities.

In other research by Kissam, he shows in a typical farmworker community there is an average of five people in a housing unit, compared to the U.S. average of 2.63. The standard definition for crowded housing is when there is more than one person per room of a residence, notes Kissam. So, putting those numbers together, the National Agricultural Worker Survey (NAWS) shows 33 percent of farmworker households are crowded.

Beyond living together, many also commute to and from work each day in crowded vehicles. In short, workers are unable to socially distance themselves from each other even after the workday is done.

Even though agricultural workers are classified as essential, most don’t have access to basic workplace protections and benefits. That’s because so many of them are undocumented workers. According to the NAWS, nearly half of all farmworkers are working outside of the H-2A visa program, which means they are working in the U.S. illegally.

Without these workers, portions of the American food system would crash, writes Michael Haedicke, associate professor of Sociology at Drake University. Yet they have little to no protections in the American labor system. Undocumented workers don’t have access to unemployment benefits if they get laid off, they don’t have access to medical care, they don’t have paid sick leave, and they were left out of the CARES Act.

To make matters worse, most don’t say anything about being sick or complain about unsafe workplace conditions because they are afraid of losing their jobs. Validating that fear is the fact there have been a number of instances where workers have been laid off for speaking up, writes Gosia Wozniacka, senior reporter at Civil Eats.

The federal government’s position has been that a company can handle worker protections as it sees fit. Thus, farmworkers rely on farming companies to keep them safe, which has been a cause for concern.

“We don’t believe that the health and safety of workers should be left to the goodwill of employers,” says María Perales Sanchez, communications coordinator for advocacy group Centro de Los Derechos del Migrante.

That lack of trust is well-founded. Many farmworkers are not being provided with protective masks or gloves on a regular basis, nor are they receiving health and safety training in a language they can understand, write Noe Paramo, legislative advocate with the California Rural Legal Assistance Foundation, and Joel Diringer, principal of health policy and data consultancy Diringer & Associates.

The lack of worker protections at all of these different levels has left farmworkers frustrated and scared.

The UFW Has Stepped Up to Help Farmworkers

Gaining and protecting rights for these vulnerable, yet essential workers during the pandemic has been a struggle. It’s a battle that labor organizations, like the United Farm Workers union, have dedicated themselves to winning.

Some of the key campaigns by the UFW to combat the impact of COVID-19 on farmworkers include:

Throughout the pandemic, the UFW has also delivered food to farmworkers’ families. Between April and August, the union, in partnership with Cesar Chavez Foundation and José Andrés World Central Kitchen, distributed between 2,500 and 4,000 meals a week in farmworker communities in rural California. In all, more than 189,000 meals have been distributed.

“While other essential workers received hazard pay for being on the frontlines of COVID-19, farm workers have received close to nothing from their employers and the federal government,” says Teresa Romero, president of the United Farm Workers. “The UFW is honored to have been a part of this partnership to provide nourishing meals for thousands of families impacted by the pandemic.”

That generosity and support from the UFW is certainly not unique to the plight of farmworkers due to the COVID-19 pandemic. It’s standard operating procedure for the union. Case in point: The California wildfires are also having devastating impacts on farmworkers, who have turned to union leaders for help.

The UFW Supports Workers Affected by Wildfires, Too

During the summer of 2020, California battled a number of wildfires, adding another layer of risk to the already vulnerable population that had been battered by COVID-19. “Needless to say it’s a disaster on top of another disaster,” says Diana Tellefson Torres, executive director for United Farm Workers Foundation.

According to data from the Center for Farmworker Families, there are between 500,000 and 800,000 farmworkers in California. In these communities, where so many are already suffering the health effects of COVID-19, working conditions have been made unbearable due to bad air quality from the wildfires.

Still, most continue to report for work for fear of losing out on much-needed pay.

“Whether it’s wildfire, pandemic, drought or storm, farmworkers are out in the field,” says Lucas Zucker, policy and communications director for the Central Coast Alliance United for a Sustainable Economy.

That’s because many farmworking communities foster “a culture where if you speak up or say you don’t want to work, you may be seen as someone who is lazy or doesn’t want to work and you may not be called back for the next harvest,” says Zucker.

Yet these workers have plenty to justifiably complain about. Because of the PPE shortage driven by the global health crisis, farmworkers aren’t getting the N95 masks they need to keep themselves protected in fields blanketed by smoke, reports Sarah Mizes-Tan, race and equity reporter for CapRadio.

Nor do these workers have many workplace benefits to support them through times of strife. That’s why they continue to lean on the UFW to help improve their working conditions and protect their health.

The UFW demonstrates its support for members by providing masks for affected workers and staying vocal about the plight of farmworkers during these dual crises. As the union continues its efforts on behalf of farmworkers, a tool like UnionTrack ENGAGE can ensure smooth communication and engagement among union members.